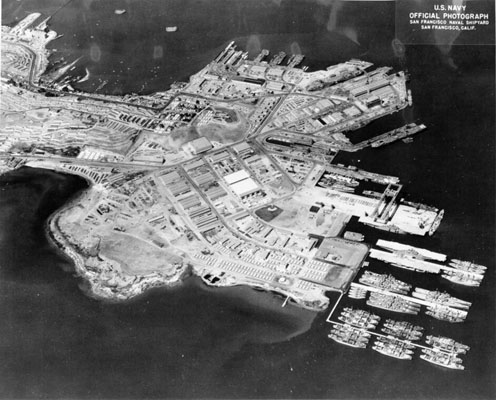 The primary global warming gas is carbon dioxide. Methane gas, heavily implicated in global warming, has been emitted for years from the Bayview Hunters Point Naval Shipyard. Sea level rise will release methane gas from wetlands and landfill, of which much of Hunters Point is composed.

Ahimsa Porter Sumchai, M.D., environmental toxin expert, notes that methane gas can exacerbate global warming by serving as a vehicle for carbon dioxide and that other gases, like volatile organic compounds and radioactive materials, can also catch a ride on it.

Global warming at one of the nation’s most toxic sites

Toxic and radiated materials are buried in all parcels at the U.S. Naval Shipyard and Hunters Point. This Superfund site was radiation-contaminated by depleted uranium left after atomic bomb “Little Boy” was assembled there.

Dr. Sumchai believes the key emerging Bayview environmental justice issue is toxic exposure and “the very real prospect that redevelopment at the Hunters Point shipyard on radiation-contaminated parcels at D and E will generate airborne and soil releases of contaminants that contain low-level radiological materials.”

She confirms that Parcel E, the site of a 46-acre industrial landfill, is worst. Dr. Tompkins attests that radium dials, irradiated animal carcasses and other unknown carcinogenic contaminants are buried in Parcel E. In 2000, Harrison, along with most of the Bayview community, was choked by the light gray to ebony smoke of a month-long underground fire, flaming bright blue, yellow and green from a mix of potential combustibles generating airborne toxins.

Said Dr. Sumchai, “As early as 2010, the Navy’s and the City and County of San Francisco’s intent is to accept a series of segments of Parcel D in what’s called an ‘early transfer’ – technically a ‘dirty transfer’ – of property” to build homes, a park and a green tech center there.

“Lennar Corp. in a recent interview with John Upton in the San Francisco Examiner announced they will consider residential development on this radiation-impacted property to be a viable option. That is absolutely frightening.” (See http://www.sfexaminer.com/local/Lennar_Corp_seeks_higher_return_for_San_Francisco_redevelopment_project.html.)

Organizer Jaron Browne asserts the position of POWER (People Organized to Win Employment Rights): “The rush to transfer the land before it’s clean, or cap it and build on top of it, is driven by developer rather than community interests.” 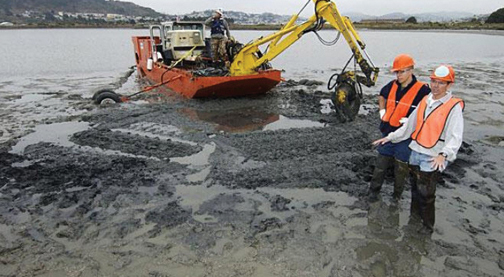 To counter news blackouts and education lag and to pre-empt exclusions of low-income peoples of color from the global warming and climate justice debate, Harrison holds informal “table meetings” explaining unfamiliar science behind climate change. She reports that, on a one to 10 scale, Bayview residents’ understanding of water rise and global warming is about 4. Despite a forced focus on the constant struggle to survive lack of jobs, high unemployment and crime, and fear for their youth, Harrison reports her neighbors are asking the right questions.

Climate justice activist Francisco Da Costa indicts China and the U.S. as the two biggest world polluters. He suspects the U.S. wants China, not itself, to become a signatory to world initiatives like the Kyoto Treaty and the Dec. 7, 2009, United Nations Climate Change Conference in Copenhagen. He believes the U.S. is using cover to deflect its responsibility to act to slow or halt global warming.

This center will “focus on promoting sustainable and clean technologies” like rooftop solar panels, insignificant fixes to major pollution and global warming problems.

Knight writes, “The green tech campus will be built on Parcel C, which sits … on the shipyard’s eastern edge.”

The center will include “an incubator to foster green tech start-ups, a conference center” and “office space for academics and scientists,” who apparently won’t realize toxic emissions could sicken them, rising sea levels inundate the land, and an earthquake liquefy soggy soil bringing the structure down.

Said Harrison, “This is a group of business men – by no means the actual United Nations.”

“Window dressing,” remarked POWER’s Jaron Browne. “The push from the Mayor’s Office, the Navy and Lennar is to cap the land, (not) clean it, transfer it before it’s clean, and be silent on key issues of water rise and liquefaction. You can’t throw in a building about Green research and sidestep the substantive issues that are affecting the neighborhood.”

To the hope of struggling Bayview residents and youth for clean, green jobs at the U.N. Global Compact building, Marie asks, “How long have they been promising our community jobs that our folks still ain’t got? You think every Black person is so stuck on stupid we’re going to believe that garbage – they are going to literally get 35 percent of these jobs?” Such omissions violate the Global Compact’s 10 human rights principles.

To meet this global challenge locally, environmental activists are notifying and organizing the community and reaching out to state, national and international groups.

Dr. Sumchai is “encouraging people to actively oppose dirty transfer of these radiation-contaminated properties, particularly in light of our knowledge that Lennar Corp. has publicly acknowledged in the mainstream media that it will consider siting housing on properties that have not been cleaned to ‘residential standards,’ the highest possible standard mandated by the will of the people of San Francisco, through Proposition P in 2000.”

Activist Harrison verifies that in Little Hollywood, Potrero Hill, Visitacion Valley and Sunnydale, “you will find maybe a handful of (activists) who truly grasp the concept of global warming.” She attributes lack of focus on water rise danger to attention constantly distracted from a series of victories to yet another Lennar attempt to legislate away their land, like Mark Leno’s Senate Bill 792, authorizing a transfer to Lennar of 23 acres of Candlestick Point Recreation Area, California’s only urban state park.

Despite this, she estimates that, among the growing number of town hall meetings being held regularly in cities around the state and Caravans for Justice that bus the activists, educated at those meetings, to Sacramento to lobby the legislature that clarity on climate change is growing.

Greenaction Director Bradley Angel stated that “as a result of two decades of environmental justice organizing, education and mobilizing in Bayview Hunters Point, like other similar low income communities of color, people are increasingly aware of climate change but are focused primarily on issues front and center to them.” He described one recent event of mobilization led by Greenaction and POWER around Hunters Point Shipyard cleanup and redevelopment issues.

In July 2009, Greenaction organized a community rally and blockade of the Innes Street Shipyard entrance. Over 200 residents served a community Stop Work Order. They placed a giant sign in the Shipyard entrance to which Harrison and other residents chained themselves. For several hours, about 200 people blocked the road. (See http://www.youtube.com/watch?v=xnTTVjCee-w.)

Da Costa reported that in August 2009, after SLAM, the Stop Lennar Action Movement, a large coalition of “organizations of groups and individuals,” “came together to stop the poisoning of our community,” the Bay Area Air Quality Management District fined bad actor Lennar $515,000 for “violations of the Air Quality Act and their (inadequate) dust mitigation.”

“We are all part of the Caravans for Justice,” says Marie: “When I go, I speak on behalf of Bayview Hunters Point residents and Greenaction.”

She confirms that these groups represent a loose coalition of “community folks who are saying, ‘Not only is enough enough. This is not just a Bayview Hunters Point issue. We’ve got to come together and work on this as Californians.’”

The groups share updates on events in their communities. Delegations from town halls visit back and forth. Members from other areas have shown up to confront Mayor Newsom in his run for governor across the state. One asked, “How can you call yourself an environmentalist while causing Bayview Hunters Point children to die?” reported Harrison.

POWER conducts grassroots door-to-door organizing in the Bayview, leadership training and strategic campaigns and maintains worldwide outreach through the Grassroots Global Justice Alliance, which could have a presence at the 2009 Copenhagen Climate Change Summit. (See http://www.ggjalliance.org/.)

Dr. Tompkins, who has devoted years contributing organic chemistry expertise to the Bayview Hunters Point community through boards and committees, demands improved testing to discover what is actually in the soil and a retaining wall to control water rise. To fund his toxic cleanups in foreign countries, the U.N. requires him to hire two native workers per project. Therefore, he wants the United Nations to mandate two Bayview residents per job or project.

He expects Global Compact corporate funders to train Bayview residents not just to be flaggers, HAZMAT handlers or green techies, but to invest in improving the impoverished Hunters Point school system to educate doctors and scientists. He believes this many-decade process will guide generations of Bayview children and youth into a salvaged middle class working to protect their community by resolving global warming problems and sea level rise.

Bradley Angel, co-founder of Greenaction for Health and Environmental Justice

Carol Harvey is a San Francisco writer whose work is published by many Bay Area periodicals. Email her at carolharveysf@yahoo.com. This story was published in part by Fog City Journal on Sept. 29. (See http://www.fogcityjournal.com/wordpress/2009/09/29/global-warming-activists-fear-sea-level-rise-will-cause-toxic-soup-at-naval-superfund-site/.) An abbreviated version will appear in the next issue of Race, Poverty and the Environment at http://www.urbanhabitat.org/rpe.

Living on this earth 95 years!

The power of vigilance