Minister of Information JR’s article, “My thoughts on Occupy Oakland after the murder and one-month anniversary,” drew a provocative response from his longtime comrade Boots Riley of The Coup (see his comments below); here, JR continues the conversation: 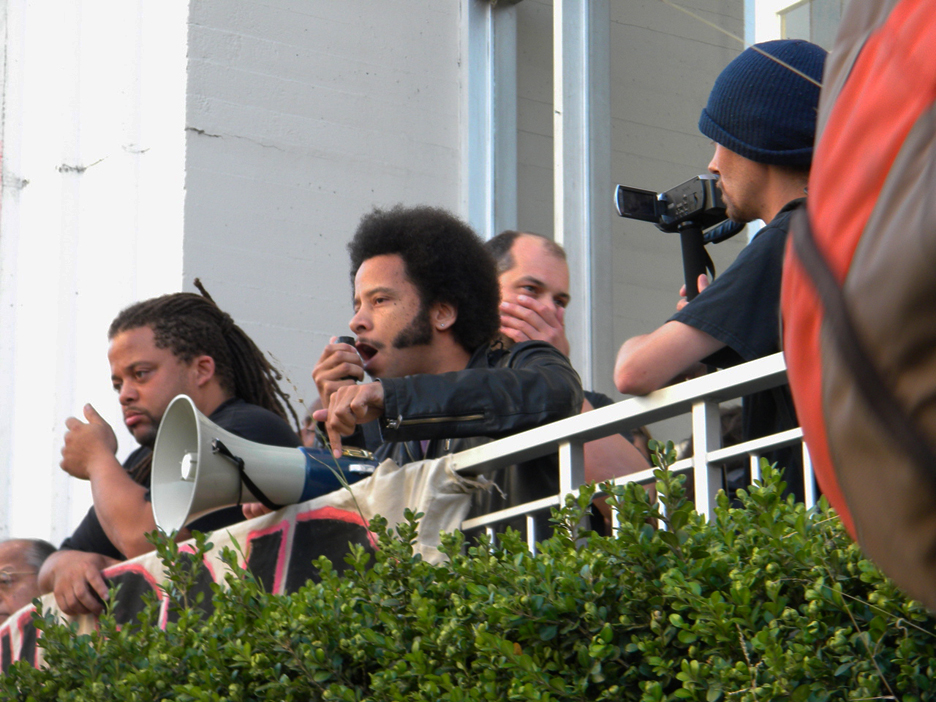 I appreciate the debate, and I respect your opinion although I do not agree. There are many factors at play that we have to acknowledge in this conversation; one is that you are a dope influential artist with a level of popularity that I would say insulates you from all of what is happening on the ground floor of Occupy. Wherever you move, crowds move. You are seen as one of the top voices in Occupy – keep it real – which means that you may not know what’s happening at the grassroots, where we all are not famous like you.

Yes, there are Black and Brown folks that are a part of Occupy. The question is whether they have decision-making power, and if you say they do, do they feel like they do? Does marginalization speak for something? I have been out there many days studying this phenomenon and how people are relating to it. I talked with people Black and white at all levels, not just here but in San Francisco too, to come up with what I think about this situation.

I agree that the mass media has an agenda that is against a people’s movement, so there is no need to debate that point. Do you not agree that the vast majority of Occupiers are white 20-30 year old hippie or anarchist types? Would you disagree that that is who runs the General Assembly? If you remember, on the day that you spoke at the library, it was a well known anarchist who gave you the mic, so that analysis of what is going on is real and cannot be ignored.

Where are all of the Black organizers of Oakland? Many of the people I have seen who are Black are artists basking in a few minutes of fame rather than trying to organize for a better tomorrow, and I’m definitely not insinuating that describes you because I do know some of your political organizing history. Keep it real, and think about it.

The other groups of Black people are new to fighting for social and political issues, which is great. Where is the Occupy Movement leading them? Is this about reforming capitalism and saying we want a few more crumbs or is this against capitalism? It seems to take on both orientations.

Is this against slavery, or is it that some people are just mad because they never get to hold the whip? I would say that the latter is true. Hang out with the Black crew that hang a stone’s throw away from where dude got murdered. Ask them how they feel. Sit there and watch some of the commotion that goes on and is unresolved because Occupy asserts white dominance but doesn’t want to deal with racism in the working class.

Is this against slavery, or is it that some people are just mad because they never get to hold the whip?

The community galvanized against the Riders, the police and city government in the Oscar Grant case, and around Lovelle Mixon, to name a few campaigns that I’ve seen within the last seven or eight years, so I don’t know why you feel like that. You keep mentioning the Black Panthers, but what led to their break with the Peace and Freedom Party? Let’s also talk about what Paul Robeson, Langston Hughes and Richard Wright – all in the Communist Party or associated with it – had to say about being led by a force outside of our community toward the end of their lives.

Where is the support for justice for Raheim Brown in Oakland and Kenneth Harding in San Francisco?

In a city where we are reportedly 30 percent of the population, we make up none of the true leadership in Occupy, except for you. If the city “caved in,” shouldn’t we, the people, have asked for more than the chance to “shoot a warning shot” at the port? Most people that I talked to were down to take the port. Why was it a warning shot? I think controlling the port could have brought Oakland to its knees, but we settle for a warning shot? There’s no warning when they shoot. Luckily it was white kids. If the port occupiers were Black, all kinds of shit would’ve already happened. 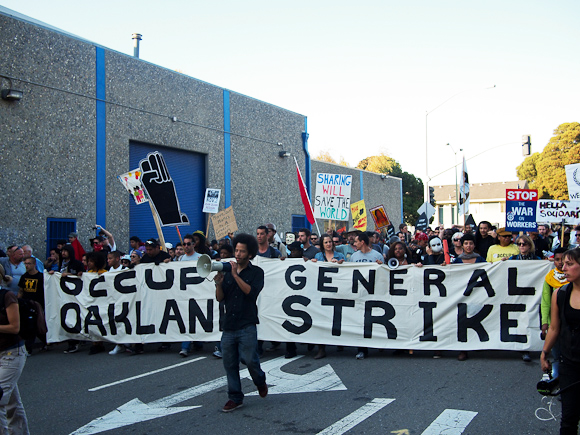 The white activists shot the police with paint guns, in the neck, and were not murdered on the spot like Black people would have been at a Black rally. I was there to witness that with my own eyes. Will you deny that white privilege has anything to do with how the police are treating this movement?

Nowhere in your whole response do you discuss racism in the working class. I mentioned that in my article. Where is your analysis on this? I know that that is not convenient to talk about right now. I’m adding to the discussion like everybody else. It is sad that you see it as “pot-shots” when I tell the world what’s on our Black minds. I’m trying to help the movement by hopefully critiquing it and altering it to something we too can believe in.

I don’t know how informed you are about Black politics in Oakland, but the campaign to keep the five schools open is a Black- and Brown-led campaign. Can we get some of you and your Occupy crew to support that? Or can we fight against gentrification in East and West Oakland, where Black and Brown families are getting their homes taken, like my grandmother in East Oakland, instead of camping outside of City Hall? Let’s address some of the Occupiers being gentrifiers? Can we politically educate on that?

The campaign to keep the five schools open is a Black- and Brown-led campaign. Can we get Occupy to support that?

What is this mass gathering of people dominated by white folks fighting for? That is what me and some many others are trying to grapple with at the bottom of the 99 percent. Boots, we are eagerly awaiting your response.

I wholeheartedly disagree with much of what you say here. First there are a lot of Black and Brown folks involved that the media doesn’t show. I could give you a gang of stories where I’m asking the media why they’re taking pictures of the folks who are dressed in “anarchist” or “hippie” attire, rather than the groups of Black and Brown folks who – in those situations – were a few feet away debating something.

More often than not, the General Assemblies are facilitated by Black folks. And there are always Black folks up on the stage. Somehow, this doesn’t make it into media images. All day at the General Strike, Black and Brown folks were up on stage – high school students, workers, organizers. No media pictures. There is a concerted effort by the media to make this seem like it’s organized by White outsiders. 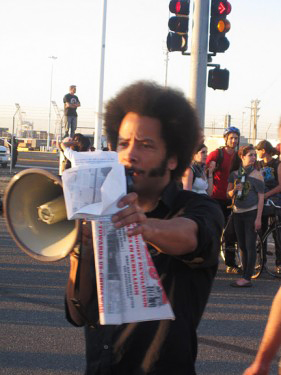 Black radicals in Oakland for the past few decades, save for a couple campaigns, have not been able to galvanize the Black population of Oakland. JR, you know this is the truth. Why are you criticizing Occupy Oakland for not doing what you, I or any other Black radical organization has not done in the past 30 years? And Occupy Oakland has only been around for a month.

We also had much of the rank-and-file of the ILWU behind us – which is largely Black. Even the Black Panther Party was criticized for supposedly having mainly White folks at their rallies. This is actually a movement with the potential to galvanize Black and Brown folks in Oakland.

The mayor didn’t LET us do anything. WE reached out to the rank and file of the SEIU, who pressured the SEIU brass, who put out a statement “encouraging” workers to take the day off. They then informed the city that their people will be taking the day off to join the General Strike and to not penalize anyone. The city caved and said they wouldn’t penalize anyone. The police stood back because we had every media outlet in the world following the story. Al Jazeera, BBC, every major network, every newspaper.

Luckily for us, the person that got shot in the head the week before wasn’t Black; it was somebody that the media wouldn’t write off to their White viewers: a young, White, Iraq veteran. So the pressure to look good was on. We had 30-something thousand to 50,000 people marching to shut down the port and we made it clear that a police line was not going to stop us – we would push through. The best thing for them to do was stand down. They were in a lose-lose situation, because if they fought us at that time, the movement would’ve grown much more.

We sent a warning shot that said that we have the power to hurt their pocketbook to the tune of millions. It also served to prove it to the community that it could be done. This is something that organizers all over the U.S. doubted could be done. We are showing that the fight against capitalism is a class war.

There are problems with Occupy Oakland; it is an unorganized movement that is still defining itself. It’s not a party. It’s not even clearly an organization.

Don’t reiterate the same arguments that have been thrown at every movement from the civil rights movement ‘til now. If you have critiques, bring together a group of folks that could change the political landscape in Oakland. Don’t just throw pot-shots to try to tear it down. It’s a worldwide movement – 1,300 cities. It’s new. Give it time and give it help.