by David A. Love

More than 80 years after their wrongful convictions, the legendary Scottsboro Boys finally received a posthumous pardon from the Alabama legislature. In 1931, the nine Black teens were falsely accused of rape by two white women and convicted by all-white juries. All but one spent time on death row and all were eventually freed, but only after doing hard time. The damage was done. 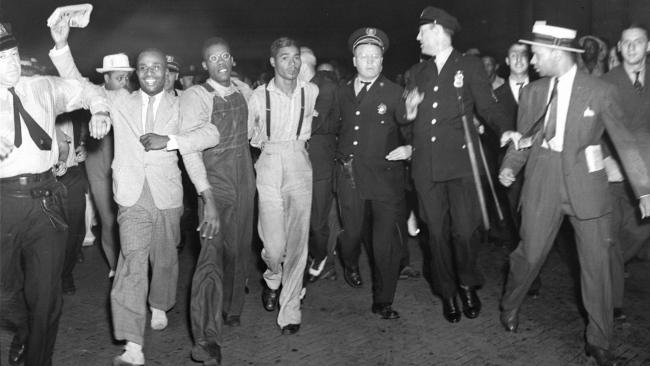 America’s civil rights history evokes a sense of pride and accomplishment, given the hard-fought battles waged in the courtroom and in the streets, and those who were maimed and martyred in the process. And yet there is unfinished business, including other wrongful convictions of African-Americans, unsolved murders of civil rights leaders, and other violations for which no perpetrators were ever held to account, and the victims never received so much as an apology. The Scottsboro Boys have been vindicated, but there are many more waiting in the wings – waiting for justice.

Like the Scottsboro Boys, Recy Taylor received justice from the Alabama Senate, however symbolic. In 1991, state legislators apologized to Ms. Taylor, then 91, who had been abducted and gang raped by seven white men in 1944. Her plight came to symbolize the sexual violence visited upon Black women by white men in the Jim Crow South.

And justice also came for the Wilmington Ten in January, when Beverly Purdue, then-governor of North Carolina, pardoned the group for their wrongful conviction four decades ago. Widely regarded as political prisoners, the Wilmington Ten – who included nine Black men and one white woman – were sentenced to a total of 300 years for the 1971 firebombing of a white-owned grocery store on the night a Black teenager was killed by police. Further, they were convicted of conspiracy to assault emergency responders who came to the scene of the fire. One of the surviving members of the group is Benjamin Chavis, former president and CEO of the NAACP.

Jack Johnson, Marcus Garvey and more in need of exoneration

Meanwhile, relief has not come for the family of Jack Johnson, the nation’s first Black heavyweight champion who was railroaded by an all-white jury in 1913. The boxer was convicted and sent to prison for a year under a law making it illegal to transport a white woman across state lines for “immoral purposes.” Johnson became a star athlete at a time of deep racial hostilities and Jim Crow lynchings, and his victory precipitated race riots across America.

The Scottsboro Boys have been vindicated, but there are many more waiting in the wings – waiting for justice.

Marcus Garvey, founder of the Universal Negro Improvement Association, was a Pan-Africanist and a Black nationalist who was an important part of the “Back to Africa” movement and had an influence on groups such as the Nation of Islam and the Rastafarians. In order to realize his goal of returning the people of the Black diaspora back to their ancestral homeland, Garvey created the Black Star Line, a transportation company.

Once described by W.E.B. DuBois as “the most dangerous enemy of the Negro race in America” for his separatism, Garvey was arrested in 1922 for mail fraud related to a stock sale in the business, a politically-motivated federal prosecution. He was sentenced to five years behind bars, and was later deported after his release from prison. A petition urges Congress to grant a pardon to the civil rights leader.

Over 40 years ago, Albert Woodfox, Herman Wallace and Robert King – known as the Angola 3 – were convicted of murdering a prison guard at Angola Prison in Louisiana. Woodfox and Wallace – who have maintained their innocence and claim they were framed due to their membership in the Black Panther Party – have been in solitary confinement since 1972.

King was released in 2001 after 29 years in solitary confinement, after entering into a plea bargain for an unrelated crime for which he was never charged. This past February, for the third time, a federal judge has overturned Woodfox’ sentence, ordering his release due to racial discrimination in jury selection at his trial.

In 1978 in West Philadelphia, hundreds of police officers raided the homes of the Black liberation group known as the MOVE organization. One officer, James Ramp, was killed with a single bullet, and 12 MOVE members were arrested. Nine were convicted of third degree murder and conspiracy, always maintaining the officer was killed by friendly fire. Eight of the MOVE 9 members are still alive and remain in prison, denied parole because they would not take responsibility for the crime. Police had demolished the crime scene, and all of the evidence with it, within hours of the incident.

The MOVE 9 arrests were a prelude to the deadly 1985 police bombing of the MOVE compound on Osage Avenue, which resulted in the deaths of 11 people, including five children, and the leveling of 61 homes over several city blocks. There were only two survivors in the MOVE house, a woman named Ramona Africa and a 13-year-old boy. In 1996, a jury awarded Africa $1.5 million in damages, which was overturned by a federal judge.

The youngest person ever executed in the United States, George Stinney, was electrocuted by the state of South Carolina in 1944 at the age of 14. A frail Black boy who was 5-foot-1 and 95 pounds, Stinney was accused of the unlikely crime of murdering two white girls. There was no evidence he committed the crime and no evidence of a confession other than the announcement of a deputy.

He was interrogated for hours without his parents or an attorney present and was coerced into a confession with an ice cream cone. Further, his court-appointed lawyer called no witnesses. When he was strapped to the electric chair, Stinney was so short in stature that he was propped up on a stack of dictionaries.

In 2006, the FBI embarked on a Cold Case Initiative to identify and investigate racially-motivated murders of the civil rights era of the 1950s and 1960s. Under the Emmett Till Unsolved Civil Rights Crime Act of 2008 – named after the 14-year-old Black boy who was lynched by two white men in Mississippi in 1955 for allegedly whistling at a white woman – the U.S. Department of Justice and the FBI are working together to address “violations of criminal civil rights statutes … result[ing] in death” that “occurred not later than December 31, 1969.”

One hundred twelve cold cases involving 125 victims were reopened, and 92 cases have been closed, with 20 cases and 27 victims remaining. These underwhelming results have disappointed the families of the victims; as the years have passed, witnesses and suspects have died, and memories of events have been erased.

One of those open cases includes the deaths of Andrew Goodman, Michael Schwerner and James Chaney in 1964 in Philadelphia, Mississippi. The three civil rights workers, working with the Congress of Racial Equality (CORE), were killed by a mob of white Klansmen at the height of the civil rights movement. Outrage at their deaths helped with the passage of the Civil Rights Act of 1964 and the Voting Rights Act of 1965.

Only one man, Edgar Ray Killen, was convicted in the killings. He was found guilty of three counts of manslaughter and sentenced to three 20-year sentences in 2005.

It is often said that justice delayed is justice denied. Many years have passed in so many unresolved civil rights crimes and injustices. And if no one is prepared to step up and pursue these cases, we must wonder if justice will ever come.

The first Black deputy sheriff in Washington Parish, Louisiana, O’Neal Moore, was fatally shot on June 2, 1965, in an ambush by a group of white men in a truck with a Confederate flag. Moore had served in his position for a year and a day. His partner, also Black, was wounded in the shoulder and lost an eye. A white supremacist was arrested for the crime, but charges were dropped and he died in 2003.

Another of the unsolved murders was of Wharlest Jackson, the treasurer of the Natchez, Mississippi, branch of the NAACP, and a Korean War veteran whose Chevy pickup truck blew up on the Natchez-Vidalia Bridge in 1967. A bomb had been planted under his car and was triggered by the turn signal. An African-American worker at a tire factory, Jackson had just accepted a promotion to supervisor, a position reserved for whites. An FBI investigation into the Jackson murder produced 10,000 pages of documents, yet all suspects have evaded prosecution.

Finally, Clifton Walker was surrounded and ambushed by a white mob as he drove from his job at International Paper in Natchez on Feb. 28, 1964. The mob unloaded their guns into his 1961 Chevy Impala. The killing took place less than two weeks after a meeting of 200 members of the White Knights of the Ku Klux Klan in southwest Mississippi, after which they committed to the extermination of Blacks in response to the civil rights “threat.”

FBI records showed that law enforcement were among the Klan members. No suspects were charged – although the federal authorities presented local prosecutors with the names of two suspects – and no arrests were made.

It is often said that justice delayed is justice denied. Many years have passed in so many unresolved civil rights crimes and injustices. And if no one is prepared to step up and pursue these cases, we must wonder if justice will ever come.