There was an ocean of signs in a sea of banners of struggle and liberation in front of Anaheim’s City Hall and the adjacent park on July 21, 2013. 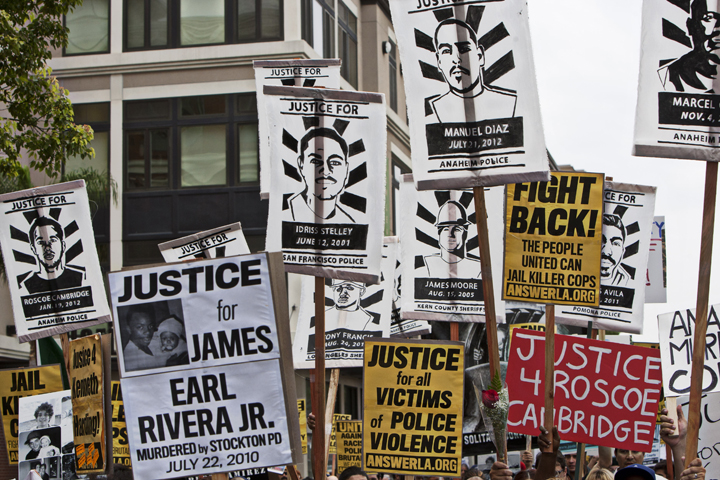 The signs held faces of those cut down in the prime of their lives in loving memory and detail. There were informational signs and signs with slogans of liberation, with demands, statements of fact and advice – such as “Fuck the system” and “FTP” (“Fuck the police”).

People of all nationalities drove by and honked their horns in solidarity. People stopped and asked questions and received information in at least two languages and Indigenous dialects.

People came from as far south as Texas, as far east as New York, from Fresno’s Central Valley, from the West Coast’s Bay Area and from as close as Anaheim, around the way. They came in cars, buses and trucks, on bicycles and motorcycles and in planes.

There was deep history present on this 21st day of July, in Anaheim, California – a history that the powers that be are loathe to recognize. 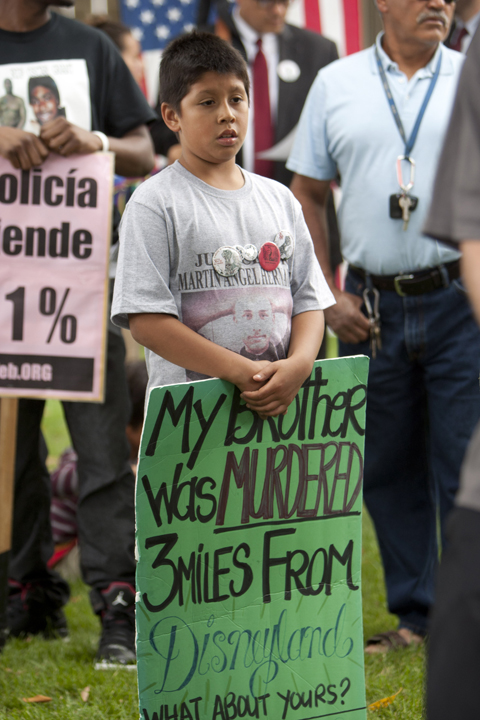 The people rallied and shouted, “All power to the people!” and “Basta ya!” Both are international mottos of protest and liberation, one from the Black Panther Party, the other used by Latino people from the streets of Brooklyn, N.Y., to the mountains of Chiapas, Mexico, and the Zapatistas.

Both mottos have historically united diverse ideologies to fight a common enemy and or to achieve a common goal.

And the fact that there were enemies present was well documented. The insightful reminder of El Hajj Malik El Shabazz (Malcolm X) that there are always enemies present during convocations of struggle and strength did not go unheeded.

Many cameras in the hands of the people’s media were present, noting the proverbial “officers friendly” that attempted to camouflage themselves behind trees, on rooftops, in plain clothes, even inside their own police station, which they elected to close for the day because 2000-plus very angry people showed up on their doorstep.

The strength and fortitude of over 30 families and communities were represented. Their pain and suffering had manifested in their will and determination to not give up, not give in, not bow down, not submit, to continue to battle back, unite, and overturn a monstrous horror – that of police brutality – when the armed might of the state targets predominantly Black and Brown children of poverty and others who are oppressed.

The people rallied and shouted, “All power to the people!” and “Basta ya!” Both are international mottos of protest and liberation. Both mottos have historically united diverse ideologies to fight a common enemy and or to achieve a common goal.

Cars drove by in the hundreds and honked their horns in support. Some people pulled over and asked what was happening and expressed their solidarity in many different languages. Even the local corporate media was out in force, representing channels 2, 5, 11, 13 and more. 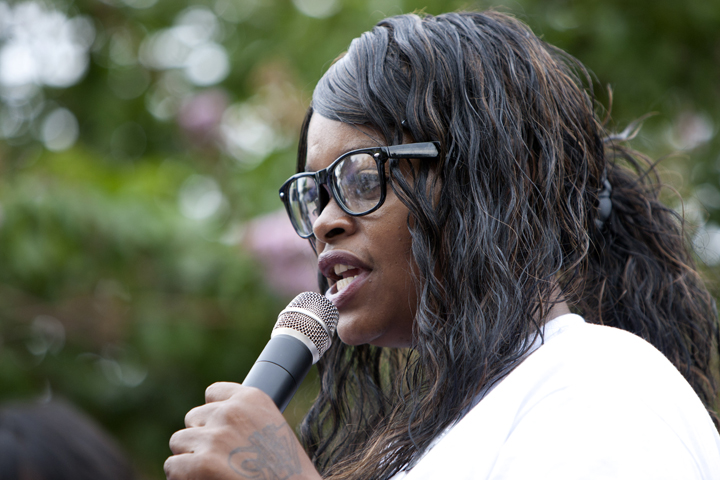 Precisely one year ago to the day, on July 21, 2012, the Anaheim Police Department murdered Manuel Diaz in cold blood as he was surrendering in compliance with police orders. On this day, July 21, 2013, 2,000 people marched in the streets of Anaheim in a tremendous outpouring of strength, unity, love, solidarity and determination to fight against state sanctioned murder.

The original call for unity and action was put out on May 23, 2013, in a letter from the mothers of Manuel Diaz and Joel Acevedo, murdered by the Anaheim PD on July 21 and 22 respectively in 2012.

Subsequent to the murders – the video went viral within two hours – Anaheim PD opened fire on women, children and other community members who confronted the police about the murders of unarmed men.

In their call to action, Genevieve Huizar and Donna Michelle Castro said in part, “We are writing to you and all organizations concerned with fighting police brutality and racism. Our sons were murdered on July 21 and July 22 of last year in the city of Anaheim, sparking weeks of rebellion and resistance to the epidemic of police violence that is affecting communities throughout Southern California and beyond.”

The original call for unity and action was put out on May 23, 2013, in a letter from the mothers of Manuel Diaz and Joel Acevedo, murdered by the Anaheim PD on July 21 and 22 respectively in 2012. 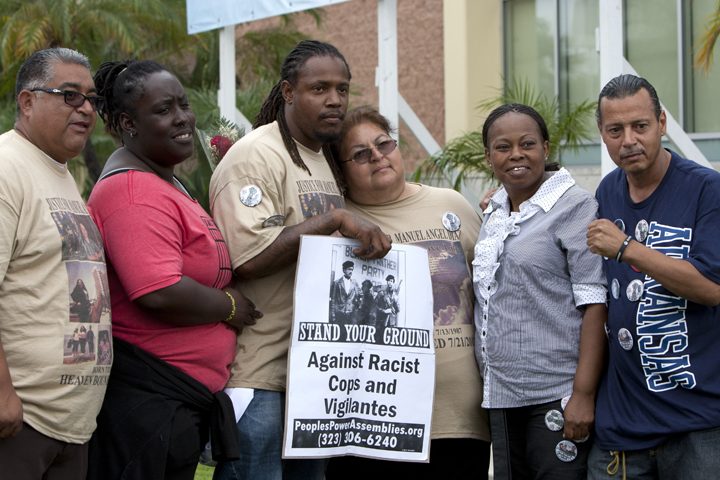 They marched against police brutality. They marched in solidarity with the global hunger strike of prisoners who have decreed that they will fight for their dignity as human beings ‘til the wheels fall off, ‘til the war is won, ‘til there are no more families who have to witness the slaughter in the streets of their sons and daughters, nor the warehousing and decades of mass torture of their loved ones.

They marched for control of their communities.

They marched against the inhumanity of the verdict for acquittal of George Zimmerman, murderer of unarmed Trayvon Martin, and the impunity of paid killer cops in police departments across this country.

They marched against the inhumanity of a system of government that condones as legal the assassination of an Afrikan person every 28 hours.

They marched, spoke out, shared their pain and suffering – and in so doing, shared their determination to build a better world – and vowed to win, in the names of their fallen loved ones and in the name of liberation.

Ultimately, this will mean destroying the system that spawns the terrorists in blue who are guilty of crimes against humanity. 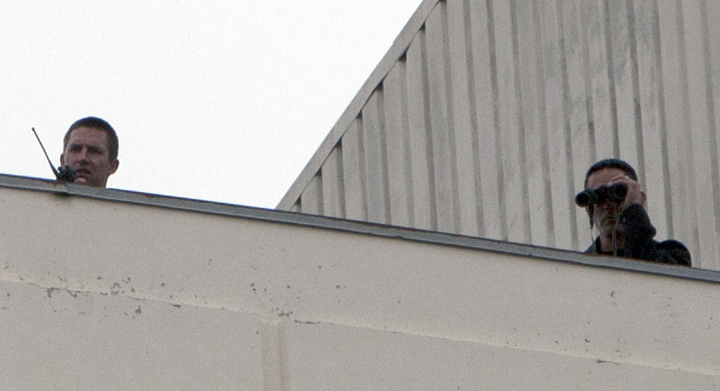 Ultimately this means destroying a system of government that was built upon the suffering of humanity – via the racism and greed of capitalism and imperial expansion.

The crowd of 2,000 consisted of community members and representatives of organizations who marched and spoke and who had been organizing in their respective communities to educate, agitate and plan. They were not just marching to waste shoe leather. They were and are participating in planning direct actions that will occur both inside (via the courts, etc.) and outside (via community organizing) the criminal system that is so unjust in the U.S.

The following families and organizations initiated this action, this call to arms: 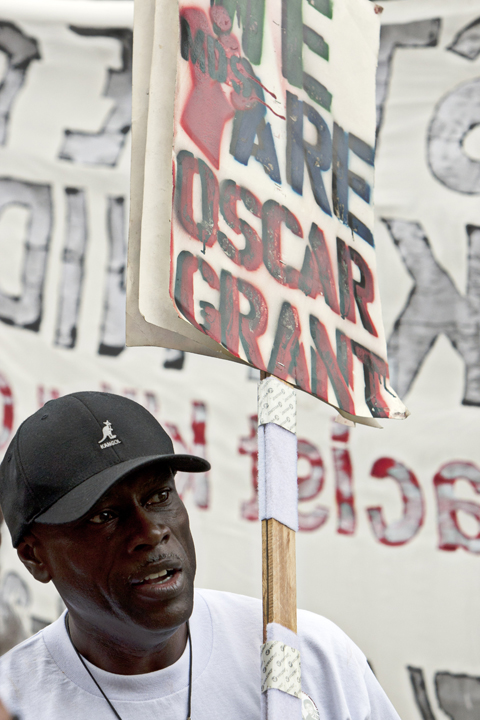 More families came, some whose names were not on the list, but who were there just the same, such as the family of Khalid M. Flimban, found hanged by the neck a few yards from the home of the person he was visiting in Laguna Hills, on Jan. 6, 2012. According to his family, the Orange County Sheriff’s Department cleaned up and tore down the crime scene within two hours and without any kind of investigation of the neighborhood. Friends and family were not interviewed for five months. His family requests that people friend his Facebook page, RIP Khalid Flimban, read the OC Weekly and contact yazzie.bedonie@gmail.com for more information. Khalid was 26 years old.

The family of Jesus Arturo Aguirre came, adding their solidarity and strength and asking that the voice of their son Jesus be heard. Jesus, victim of the prison industrial complex, was sentenced to life in prison at age 16, convicted of eight charges connected to a personal dispute between two other people. But he was a part of the same social network – i.e., he was a victim of exaggerated charges for living in an alleged “gang zone” – hence his life sentence.

People seeking to connect with his family can find more information through his father, Jesus Aguirre Sr., (323) 646-1080, and on his Facebook page, Jesus A. Aguirre, Justice for Jesus Aguirre and Colectivo Tonantzin. A petition can be found at http://www.change.org/petitions/re-trial-or-case-dismissal-for-jesus-a-aguirre. 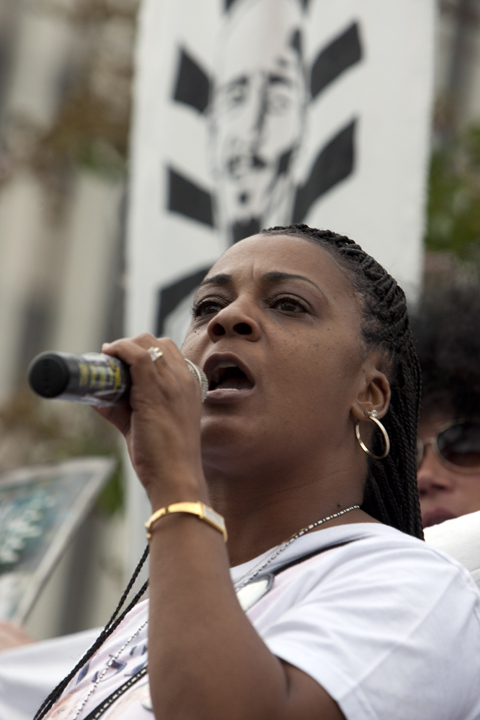 Jesus is now 19 years old and had no criminal record prior to incarceration.

In a pre-rally message of solidarity with all conscious people, Genevieve Huizar, the mother of Manuel Diaz, who was murdered by Anaheim police on July 21, 2012, said:

A movement is being built from the grassroots of families who are being stripped of their young men and women, their children, their fathers, brothers, sons, nephews, cousins, their mothers, sisters, daughters, nieces, their disabled loved ones via brutal murder at the hands of police, via unjust decades of imprisonment in the incarceration nation of the U.S., via the continued growth of an oligarchy, of the existing police state.

Two thousand strong and counting, they marched and reminded the world that our lives are not expendable and that systemic racism is an intolerable act of cowardice and imperial greed that will be smashed.

Two thousand strong and counting, they marched and reminded the world that our lives are not expendable and that systemic racism is an intolerable act of cowardice and imperial greed that will be smashed.

The following message of solidarity, read by Rebecca Doran, came from Kevin Cooper from behind the walls of the death house at San Quentin Prison:

“To protest is a right

“Frederick Douglass once said, ‘It’s easier to build strong children than it is to repair broken men.’

“The same can be said for women, as they are included in the oppression that has been going on since the beginning of human beings oppressing each other.

“Throughout the history of this world, at one time or another, certain people from every generation have had to fight for their equality, their civil rights and, most importantly, their human rights!

“Without these historical and current day struggles, it’s safe to say that more people would be oppressed than currently are. But of those who are being oppressed, they are tired of it! All over this planet, poor and oppressed people are standing up and speaking out and fighting back in every way that they can, even non-violently, to gain what was theirs at birth: their human rights. 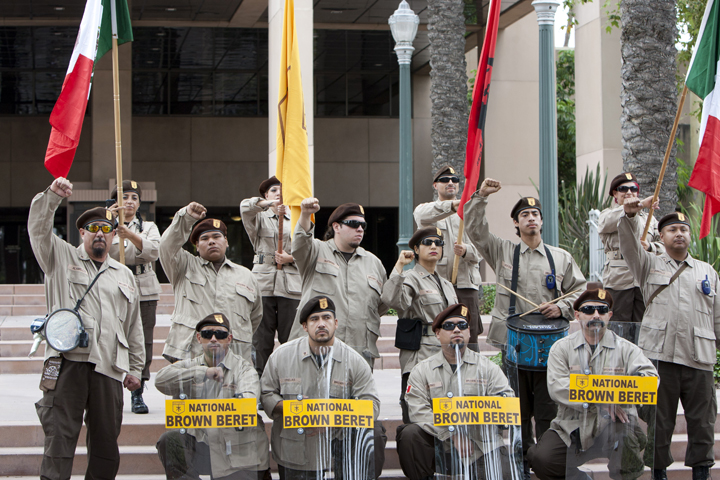 “Many have been broken, but many more have not and won’t be, because they understand that this ongoing struggle for their human rights is bigger than them as individuals. It’s about our collective humanity!

“One thing is for certain, and history is our best teacher in this: If there is no struggle, there will be no change! The fight for one’s human rights is not always easy, but it’s necessary. Especially when it comes to people who have been targeted by the system.

“To do or say nothing is to suffer in silence while you’re treated like a non-human, a stereotype, a piece of trash. In America, we have in this so-called democracy the right to protest for our rights, and it’s a right that must be used to change the system.

“Because not only is protesting a right, it’s your constitutional right, which is so very important for all of us to remember, because the oppressors don’t seem to follow the Constitution when it comes to us, the oppressed!

“So no matter where you are, if you’re being repressed, undressed, suppressed, regressed, depressed and outright oppressed by the powers that be – it’s in your best interests to PROTEST!”

Wave after wave of family members and organizations spoke, sharing their stories with a crowd that actually grew larger as the march to the Anaheim police station continued. And the crowd – people in wheelchairs, children in strollers, youth, adults and elders – spoke back, giving its solidarity and fierce determination to win!

“So no matter where you are, if you’re being repressed, undressed, suppressed, regressed, depressed and outright oppressed by the powers that be – it’s in your best interests to PROTEST!”

This fight isn’t going to go away.