by Dick Price and Sharon Kyle

Gov. Jerry Brown’s just-proposed plan to ease overcrowding in California prisons without releasing inmates early has drawn quick opposition from prison reform activists across the state and has spawned an alternative approach from a contingent of moderate and liberal Democrats in the state legislature, creating an unusual rift among senior Democrats in the age-old incarceration-rehabilitation divide that usually pits Republican against Democrat.

Announced Tuesday, Aug. 27, Brown’s plan would spend more than $1.2 billion over three years to rent beds in private prisons here in California and in other states, reopen city-owned detention facilities in the Central Valley, keep open a state prison slated for closure and put more prisoners in county jails, including the already “bursting at the seams” L.A. County Jail system.

“With a year-end compliance deadline looming, they give us the worst possible deal, delighting not only Republicans but rewarding the prison guards’ union with a package that includes extensive use of private prisons that will be staffed with the highest-paid guards in the nation,” remarked Rev. Peter Laarman of Justice Not Jails.

In response, community groups – including Californians United for a Responsible Budget and the ACLU of Southern California – have begun collecting signatures and encouraging Californians to contact their legislators to stop what CURB calls the “worst possible scenario not just for prison reform in California – but for our schools, our roads, our hospitals and our social services.”

“We have a broken system and simply pouring more money down that drain won’t fix it,” Sen. de Leόn stated.

“We need a new approach and one that emphasizes more than incarceration, but rehabilitation as well,” de Leόn said after recently meeting with a contingent of prison and drug policy reform activists in his Northeast Los Angeles district.

Community groups – including Californians United for a Responsible Budget and the ACLU of Southern California – have begun collecting signatures and encouraging Californians to contact their legislators to stop what CURB calls the “worst possible scenario not just for prison reform in California – but for our schools, our roads, our hospitals and our social services.”

Earlier this month, a group of prison and drug policy reform activists met with de Leόn to urge him to vote yes on California’s AB 218, a piece of legislation dubbed “Ban-the-Box” that would prohibit state and local agencies from including a box on employment applications requiring applicants to disclose criminal convictions. The measure would not preclude agencies from gaining prior criminal history information after determining the applicant meets the job’s minimum employment qualifications.

Proponents of the measure argue that without this legislation, agencies will continue to do what they have been doing – tossing out the employment applications of formerly incarcerated people before giving the application a once over.

De Leόn, who chairs the Senate Appropriations Committee, represents a district whose constituents are heavily impacted by the state’s high rate of incarceration. AB 218 and other Ban-the-Box legislation across the country are gaining broad support from a groundswell of community activists, formerly incarcerated and their loved ones in response to the high rates of unemployment and the high rates of recidivism.

Experts assert that increased recidivism is highly correlated with the inability of formerly incarcerated people to find gainful employment. AB 218 takes a step to mitigate this.

The coalition of organizations including Justice not Jails, Homeboy Industries, the Drug Policy Alliance, A New Way of Life, All of Us or None and the LA Progressive convened in the senator’s Echo Park office where they took turns sharing the reasons they support the measure. De Leόn listened and then assured the petitioners that he supported the measure.

The bill was passed on Aug. 12. During that same week Attorney General Eric Holder announced major federal sentencing changes, including dropping the use of mandatory minimum sentencing in certain drug cases, and U.S. District Court Judge Shira Scheindlin ruled that the New York City police violated the civil rights of minorities with the implementation of their “Stop-and-Frisk” policy.

Experts assert that increased recidivism is highly correlated with the inability of formerly incarcerated people to find gainful employment. AB 218 takes a step to mitigate this.

With these victories for prison and drug policy reform and the flurry of legislation across the country decriminalizing marijuana use and “banning the box,” it seems the criminal justice tide is turning. Perhaps seeing the writing on the wall, California’s more liberal Democrats may not want to be on the wrong side of this issue.

The governor and his allies, on the other hand, have a different plan.

Outlined in Senate Bill 105, Brown’s plan earmarks $315 million in the first year and more than $400 million in two subsequent years, to rent private and out-of-state space for 8,000 inmates to bring California’s prison population to 137.5 percent of capacity by year’s end, as ordered by the U.S. Supreme Court. Efforts by the Brown administration to extend that deadline have so far fallen on deaf ears. 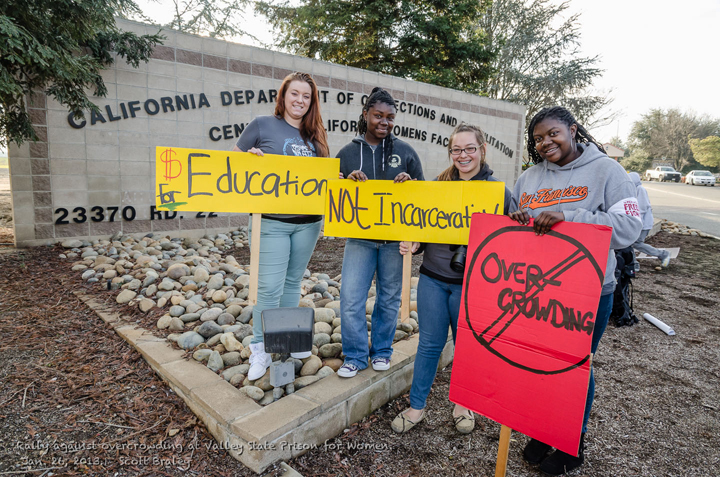 By contrast, Steinberg’s counterproposal would use a three-year extension of that deadline during which California counties would get $200 million per year to expand drug treatment and mental health care for criminal offenders, far less expensively and more effectively than the “no end in sight” Brown plan.

“The governor’s proposal is a plan with no promise and no hope,” Steinberg said in a statement. “As the population of California grows, it’s only a short matter of time until new prison cells overflow.”

Indeed, it is hard to imagine the state’s prison-industrial complex putting the mechanisms in place to house these additional 8,000 inmates – getting all the private prison contracts negotiated, hiring and training the guards and support staff, moving the prisoners hither and yon – and suddenly after three years saying, OK, now it’s time for rehabilitation.

No, once you’ve got that prison bedspace capacity in place, you’re going to find a reason to keep it – and then grow it. Forty years of California’s exploding prison population tells you all you need to know.

Steinberg’s plan would also set up an independent panel to determine appropriate prison population levels and an advisory committee to recommend changes to the state’s sentencing laws that have done so much to pack California prisons to the gills, often with low-level drug offenders, elderly long-term prisoners, and others who could better serve themselves, their families, their communities, and California taxpayers through effective supervised release and community-based rehabilitation and support systems.

“The governor’s proposal is a plan with no promise and no hope,” Steinberg said in a statement. “As the population of California grows, it’s only a short matter of time until new prison cells overflow.”

Although both Brown and Perez waived off Steinberg’s plan with the usual talk of keeping as many prisoners behind bars for as long as possible in the name of “keeping the public safe,” far more effective and humane approaches are available to fix California’s broken criminal justice system. Included at the county level are programs to increase the use of split sentences – part in jail, part supervised released – develop alternatives to detention for pretrial detainees, and expand community support systems as opposed to endless incarceration.

And the tide seems to be turning for the public as well. Commissioned by Californians for Safety and Justice, recent survey results by David Binder Research circulated by the Steinberg camp show

But will that be enough? As Peter Laarman said: “The real threat Democrats are worried about is not crime but possible backlash from Republicans and law enforcement. It’s pure politics, in other words, only there’s nothing very ‘pure’ about perpetuating suffering and betraying California voters for the sake of political expediency.”

Dick Price and Sharon Kyle are editor and publisher of LA Progressive, where this story first appeared.