May 21 through June 7, 2015, the world will converge upon San Francisco for three weeks of performances, visual arts exhibitions, installations and residencies with artists from around the globe. The San Francisco International Arts Festival (SFIAF) will co-present with Fort Mason Center SFIAF 2015, an impressive arts festival featuring 150 performances, 60 ensembles and 16 countries.

Now in its 13th season, SFIAF remains committed to bringing together a global community of artists and audiences. According to Festival Director Andrew Wood, the festival’s curatorial priorities include helping to foster groundbreaking artistic collaborations among Bay Area artists and their national and international peers, while also offering a noteworthy stage for gifted international artists presenting U.S. premieres of works that might not otherwise be seen in the U.S. And what better place to premiere such works than in San Francisco?

The San Francisco Bay Area has a rich tradition of cultivating the arts and artists whose trailblazing works and enduring legacies make lasting impact. One such artist is Ms. Blanche Brown. A master teacher and cultural arts ambassador, Ms. Blanche is a Berkeley native whose lifelong passion has been dance – learning it, teaching it and offering it, filled with spirit, to the world.

At 79 years young, she recalls one of her earliest dance memories: “I think I was about 9 or 10. My aunt, who was this amazing jitterbug dancer, came home after winning a contest at the USO and spent the rest of the night teaching me the dances!” The thrill of that moment and the joy of communing through dance could easily be felt as she recounted this story. Rhythm, it seems, had always called her to prayer, and the prayer was dance.

“Whenever music came on while we were seated at the dinner table, I just couldn’t keep still. I remember my grandmother saying, ‘Oh, that child just has rhythm in her bones. Now sit down and eat your dinner!’”

Quite some time would pass before Ms. Blanche would pursue her passion. Yet she persisted and at 35, the wife and mother of three returned to San Francisco State University (SFSU) to study dance. At SFSU, she fell in love with Haitian dance (then known as Afro-Haitian) not knowing it would lead her on a spiritual journey that would change her life.

Her journey has had many stops. Annual trips to New York found Ms. Blanche learning with master artists, studying Haitian spiritual traditions, participating in ritual ceremonies and experiencing firsthand the difference between performance and dancing for spirit. Next was Nigeria, where she performed with Nontsizi Cayou’s Wajumbe and absorbed the rich spiritual influences of West Africa. When Africa came to her by way of Malonga Casquelourd’s arrival in the Bay, she learned that from an African perspective, all dance was ritual, each having a specific rhythm and purpose within its traditional context.

In 1988, Ms. Blanche gathered all of these lessons and experiences and formed Roots of Haiti (later known as Group Petit La Croix). She served as artistic director for over 15 years creating, performing, touring and cultivating the next generation of artists to preserve Haitian arts traditions in the Bay Area.

Today, Ms. Blanche does not tour and very rarely holds rehearsals. You can find her making beautifully crafted and highly coveted dance bags, doting on her grandchildren and teaching a weekly dance class at Rhythm & Motion Dance/ODC, where she continues to inspire her students to dance without limitations.

This year, SFIAF partnered with Congo SQ West Kinship Society to pay homage to an amazing and enduring keeper of culture, Ms. Blanche Brown. On May 28, a stellar cast of dance and drum luminaries, including Marcus Gordon, Linda Faye Johnson, Roger Dillahunty and Elizabeth Soberanes will grace the stage and celebrate the guest of honor, inaugurating this historic event: A Night of Tribute in Dance: Blanche Brown.

When asked what inspired the tribute and why it was important that it happen now? Artistic curator of Congo SQ West Kinship Society and Executive Producer of A Night of Tribute in Dance, Regina “Califa” Calloway, shared that in this milestone 10th year of service for Congo SQ West: “It is important for us to honor breath, honor life and honor the legacies of our communal kinships and living legends. Our elders are our living, breathing and dancing libraries whose stories and works must be preserved in order to sustain generation next, now.”

Congo SQ West Kinship Society is a powerful collective of artists, change-makers and cultural workers whose mission is “serving to build bridges, restore networks and bind cultural ties.” Propelled into action in 2005 in response to the Gulf Coast hurricanes, Congo SQ West Kinship Society is proud to partner in presenting this important night of tribute.

Another locally grown and internationally lauded artist featured at SFIAF 2015 is devorah major. The third poet laureate of San Francisco (2002-2004), a trained actor, former dancer and award-winning writer, Ms. major has traveled to Italy, Bosnia, Jamaica, Venezuela, Belgium, England, Wales and throughout the United States performing her poetry. A prolific writer, she has published four volumes of poetry, three chapbooks and two novels, and her writings have been included in numerous anthologies and periodicals.

June 4, 6 and 7, 2015, Ms. major will premiere her newest work, “Classic Black,” at SFIAF 2015, where persona poems, stories and music give voice to 19th century African Americans’ stories of struggle and survival in pre-Civil War San Francisco. Her inspiration for creating this work was to share oft obscured narratives and significant moments in African American history – beyond the March on Washington, slave plantations, emancipation and/or the Civil War. Too often the few pages allotted to African Americans in history books leave many stories untold, stories that would affirm the triumphant humanity of the African experience in America.

“Classic Black” calls forward into our collective consciousness the African American imprint on California’s history and, in particular, the city by the Bay. In it are told the stories of “Mary Ellen Pleasant, entrepreneur, abolitionist and for some the mother of Civil Rights – preceding Rosa Parks by a hundred years; William Leidesdorff, steamship captain, merchant and California’s first Black millionaire; Sylva, mother of George Washington Dennis, horse tamer, carriage shop owner, real estate tycoon and political powerhouse helping Blacks to get the right to testify in court and vote in California; and Archy Lee, a Black who fled from his slaver three times before finally finding freedom, due in no small part to the Black community that resided in San Francisco.”

Muisi-kongo S. Malonga is a writer, seasoned dancer and teaching artist. The East Palo Alto native is the artistic director of Fua Dia Congo and a founding member of Congo SQ West Kinship Society. She can be reached at muisikongo@yahoo.com. 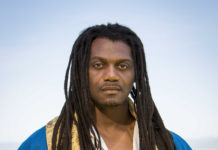