All of Us or None’s upcoming Formerly Incarcerated and Convicted People’s Western Regional Conference is Sept. 20-21 at Oakstop, 1721 Broadway in downtown Oakland. It will be a time for people to discuss employment, housing, crimmigration, which is the connection between the punishment system in the U.S. and immigration policies, and more. 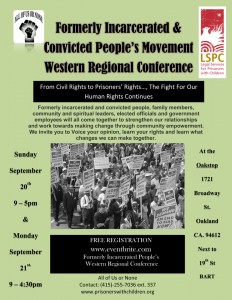 I wanted to talk to one of the main organizers, Manuel La Fontaine, about the conference and his life experiences. Check him out in his own words.

M.O.I. JR: How long were you locked up during your longest period in captivity? What concentration camps were you kept in?

Manuel La Fontaine: My longest time in captivity was approximately 51 months. I was held captive in the following cages: San Francisco, San Mateo and Santa Clara county jails and San Quentin, Folsom and Soledad state prisons. However, after our history as colonized people in the U.S., particularly our ancestors that were in slavery, along with the contemporary concentration of Black and Brown people in cages ranging from children’s jails to privatized “detention facilities,” one day in captivity is a day too long.

M.O.I. JR: How did you get involved with All of Us or None? What is it about the organization that made you become a member?

Manuel La Fontaine: Started building with AOUON as I was wrapping up my final year at San Francisco State University. My comrade, Jason Bell, who is with Project Rebound, a program that supports formerly imprisoned people pursuing educational objectives at a four-year college, introduced me to Hamdiya Cooks-Abdullah.

Hamdiya, a co-founding member of All of Us or None, and I embraced each other upon meeting, and the rest is history. The camaraderie among the elders that rippled throughout the organization and our self-determination pledge were two key factors that made me commit unconditionally to the concept and values of All of Us or None.

I see All of Us or None as being more than an organization. I see it as a philosophy, as a lifestyle, as a lifetime commitment to dare to struggle for those left behind those walls, for those who survived the madness, and towards making our communities safe and secure for everyone.

M.O.I. JR: Can you tell us about All of Us or None’s upcoming Formerly Incarcerated and Convicted People’s Western Regional Conference? What will be happening? Who are the speakers? What are the panels about?

Manuel La Fontaine: We will be organizing a Western Regional Conference on Sept. 20-21 at Oakstop, located at 1721 Broadway in downtown Oakland.

The conference is being organized by people directly impacted by the punishment system, aka “criminal justice” system. We will be organizing ourselves to speak truth to POWER, both in the community and to invited elected officials from the federal government.

We are demanding that President Obama issue an executive order ensuring that both federal agencies and federal contractors are doing their part to eliminate unnecessary barriers to employment for people with conviction records.

All of Us or None’s upcoming Formerly Incarcerated and Convicted People’s Western Regional Conference is Sept. 20-21 at Oakstop, 1721 Broadway in downtown Oakland.

The conference will have panels of formerly incarcerated people and family members of critically impacted people sharing their testimonies about the common problems our communities face, as well as impart our solutions.

There will be panels on employment and housing discrimination, the pursuit of education for people in cages, crimmigration or the marriage of immigration with the punishment system, impact of legislation supporting legalization vs. decriminalization of cannabis on people. We will address how fear, racism and liberalism, or “stay-in-your-place-ism,” impacts our ability to survive post-captivity.

M.O.I. JR: Why is it important to have an organized movement that speaks to the issues of formerly incarcerated and convicted peoples?

Manuel La Fontaine: While our friends, allies and supporters who know us recognize our work and our campaigns, unfortunately, the dominant narrative and the stigma that comes with incarceration prevent formerly incarcerated people as a community from being seen as legitimate people in this society. Surprisingly, this exclusion even extends to the prison-reform movement.

As Daryl points out, “People with arrest and conviction records are often relegated to being effective organizers and mobilizers, but rarely are we looked upon as policy advocates, strategic thinkers and researchers.” I would add even as leaders in our communities.

We are more than effective organizers, sign-holders and storytellers. We are educators, attorneys, nurses, directors of agencies, and critical thinkers and actors; yet, we are glaringly forgotten and excluded from the meaningful discussions and decision-making tables regarding recidivism, “reentry” and making our communities safer.

In addition, we cannot talk about ANY organized movement unless we incorporate the struggles facing political prisoners here in America. For us to have any real, inclusive movement, we must honor those who sacrificed and paved the way for us to have the little bit of freedom we have today. Political prisoners are people who were persecuted, prosecuted and captured for their resistance to state oppression, in particular state violence against people.

Some have been held captives for decades, including our late comrade Hugo “Yogi” Pinell, who was held captive for over a half century but was assassinated on Aug. 12, 2015, inside and by the California Department of Corrections and rehabilitation (CDCr). Any and ALL organized movements must recognize and support the campaigns and overall liberation efforts of Leonard Peltier, Oscar Lopez Rivera, Herman Bell and ALL other political prisoners.

Manuel La Fontaine: Systemic and pervasive discrimination all over the spectrum, from employment to housing to life insurance, forces many of us to live off the informal economy. PTSD is another internal beast we have to survive with in many cases, and our reluctance to trust the inextricably intertwined systems forces many of us to go untreated and in many cases get into self-medicating off the informal health care market.

If one ignores root causes, poor people of color are then blamed for America’s social ills. Unfortunately, according to the dominant discourse, the solution is punishment and focusing solely on personal responsibility.

Systemic and pervasive discrimination all over the spectrum, from employment to housing to life insurance, forces many of us to live off the informal economy.

We fundamentally believe that the real and main incubators of violence in America are capitalism, structural racism, and exclusionary policies and practices preventing people from being treated as human beings.

M.O.I. JR: What does All of Us or None hope people get out of this two-day conference?

Manuel La Fontaine: We want people who have survived the madness of captivity both in and out these cages – although some would argue that some parts of the Bay resemble minimum to maximum security prisons – recognize our power in unity, that as individuals we may accomplish individual goals and objectives, but our communities are still burying their young ones prematurely and living in inhumane conditions.

But if we come together, the over 70 million of us who have been in cages at some point in our lives, we will have a large political base to demand change and liberate ourselves from contemporary slavery.

M.O.I. JR: Why did All of Us or None make the conference free?

Manuel La Fontaine: Because we don’t believe knowledge, wisdom and community should have a monetary price on it. We don’t believe that as a society we should commodify people, animals or the land.

Unfortunately the dominant discourse in America places value in prisons, policing and punishment over human consideration. So we were fortunate enough to secure some resources and recognize that poverty makes many things unattainable. Knowledge of self, love and people power should be made accessible to the people.

Unfortunately the dominant discourse in America places value in prisons, policing and punishment over human consideration.

M.O.I. JR: How could people register and get more information on the conference?

M.O.I. JR: What is going on with the Agreement to End Hostilities in the California prison system after the assassination of the famously courageous political prisoner Hugo Pinell a few weeks ago on a yard in New Folsom?

Manuel La Fontaine: It was people inside California state prison Security Housing Units, often stereotyped as the “worst of the worst,” who created the Agreement to End Hostilities. This agreement, which CDCr failed to honor and distribute widely, has been most instrumental in reducing CDCr-orchestrated violence inside the cages, with ripple effects extending out to the streets.

While we are devastated by the recent assassination of Hugo Yogi Pinell, we are hopeful that all critically conscious people and all like-minded people inside CDCr will maintain their eyes on the prize, which is unity towards our collective self-determination.

It was people inside California state prison Security Housing Units, often stereotyped as the “worst of the worst,” who created the Agreement to End Hostilities.

It is obviously easier said than done, considering that the assassinations of people inside cages and on the streets by guards, police and vigilantes is a constant reminder of how racism has morphed into being normalized in America. The fundamental questions remain: When is enough enough? And do people who are being attacked for being Black, Brown, undocumented or considered inferior in America have the right to defend themselves?

M.O.I. JR: What is the status of the California Prison Movement four years after the monumental California prison hunger strikes?

Manuel La Fontaine: We are still trying to process and come to terms with the recent assassination of Hugo Yogi Pinell. Many of our elders and comrades inside from different backgrounds are committed to honoring the Agreement to End Hostilities.

There is also some discussion of a potential settlement in the litigation brought forth by representatives who helped organize the hunger strikes inside CDCR and are demanding an end to solitary confinement as we now know it to exist. However, I don’t have the details or luxury to share them if I did, since it’s premature due to ongoing developments.

I am optimistic that people inside CDCr and those of us who have survived the madness of captivity will be able to see past our immediate grief, anger and personal differences and recognize the need and power of building a protracted movement that is led by people who have endured the terrorism inside the cages of America.