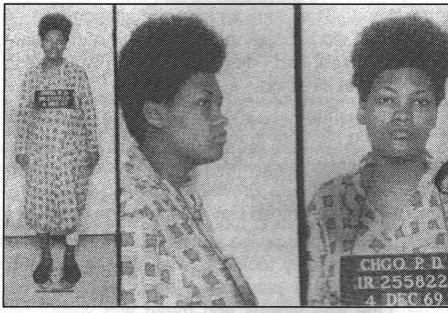 2337 West Monroe
December 4th, 1969
on the cusp of a new year
You
19 years old
lay sleeping
carrying
a new day
in your belly

prayed for him
the power of speech

to his unborn son

Yes
because you carried
his legacy inside of you

“he is good and dead now”

“You can jail a revolutionary, but you can’t jail the revolution”

Njeri is the chairperson of the December 4th Committee, which fights to defend and maintain the legacy of the Black Panther Party and what really happened on that fateful morning. December 4th co-coordinates with POCC (Prisoners of Conscience Committee) the annual Aug. 30 birthday celebration and commemoration of Chairman Fred Hampton and the life, work and commemorative events around the annual December 4th International Revolutionary Day (IRD), the anniversary of the “Massacre on Monroe” – the assassination of Chairman Fred and Defense Captain Mark Clark.

Njeri is the co-author of the proposal to name one Chicago block – 2300 W. Monroe –”Chairman Fred Hampton Way,” a campaign that exposed the dividing line between the interests of the state against the demands of the people.

Njeri coordinates free clothing and fresh vegetable giveaways with POCC and other survival programs. She continues to fight against police terrorism and for the freedom of political prisoners in the U.S. She also is on the Advisory Committee for POCC. For information and speaking engagements, contact December 4th Committee, P.O. Box 368255, Chicago, IL 60636, (773) 256-9451 or akuanjeri@aol.com.

“For Akua Njeri” read by the poet, Titilope Sonuga

As it should be