The human spine is like a strand of pearls linked together by ligaments, muscles and connective tissues 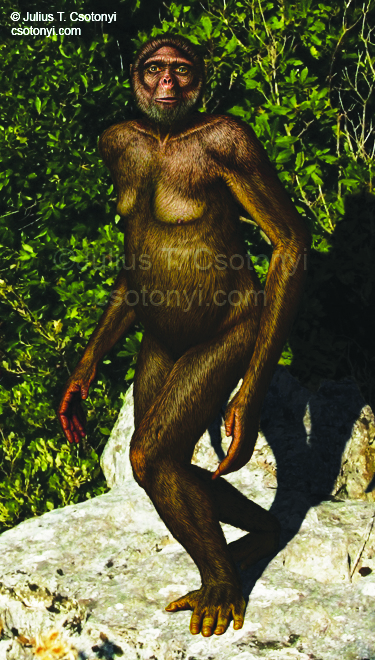 From the Afar region of Ethiopia emerged the two oldest fossil remains of early humans. Both female. They walked upright millions of years ago. Lucy was discovered in 1974. She was short and had a small brain but gathered nuts, berries, insects and eggs from unguarded nests about 3 million years ago in the woodlands of East Africa.

The latest “evolutionary debutante” was revealed on Oct. 2, 2009, when 11 research articles were published in the prestigious journal Science detailing 15 years of research culminating in the “reveal” of Ardi – Ardipithecus Ramidus – whose complete skull and pelvis crowns her as the greatest grandmother of modern day humans. She reigned over 4.4 million years ago and offers the strongest and most irrefutable evidence of human evolution ever discovered. About 2 million years ago these women evolved into the species Homo erectus. They walked upright out of Africa to populate the world.

What do we know about these primordial women? Their eternal strength and endurance speaks to us through the mirrors of time. We know they bore children and carried them on their backs. They bent and lifted and climbed to survive. They carried food, animals and tools on their backs. And like 85 percent of modern day women, they suffered from back pain.

Back pain is the single most common complaint seen in any primary care setting. It comes with the territory. The human spine is like a strand of pearls linked together by ligaments, muscles and connective tissues. There are seven cervical discs, 12 thoracic and five lumbar, in the normal spine. On assuming the upright posture, the center of gravity and all the forces the upper body is subjected to in work and play pass through the cervical and lumbar spine and are equally distributed through the hips, knees and ankles.

Exercise that strengthens the abdomen and core muscles of the trunk and pelvis prevents and treats back pain. Yoga and pilates have been found to be superior forms of exercise for strengthening the abdomen, back and pelvis. Ballet dancers and Olympic rowers include pilates in their exercise programs.

Back pain is growing in incidence as a direct result of the obesity epidemic. Abdominal fat is called truncal adiposity. It throws the alignment of the lower lumbar spine forward subjecting greater stress on the trunk and pelvis. Sitting at a computer station or at a secretarial desk for six to eight hours a day compresses the lower spine and pelvis. Smoking cigarettes decreases the blood flow to the spine. Processed foods that contribute to constipation increase strain on the abdomen and pelvic floor muscles. If you are not having a bowel movement every day, you can be carrying up to 10 pounds of fecal material stored in your colon that is an added load to your low back and abdomen.

The human spine can contain extra curves that are called scoliosis or kyphosis. When an extra curve appears in the area of the spine at the level of the shoulders – called the thoracic or dorsal spine – it produces a hunchback or kyphosis. Older women with thinning of the bones, called osteoporosis, will lose height as a result of the collapse of the spine in the thoracic region and the development of a hunchback. Some of you have seen women who can be flexed forward as much as 90 degrees because of this abnormal bend in the back.

Most women over the age of 50 have some degenerative arthritis of the spine called spondylosis. Additionally, women who have worked in occupations in which they have been subjected to repeated or cumulative loads to their spine may present with degenerative disc disease. In this condition, the “shock absorber” between the spinal elements called discs become flattened and extrude a jelly-like material into the holes where the nerve roots come out that are going to the shoulders, arms, hands and legs.

Like a telephone cable, the nerve roots always go to the same area. If you have low back pain with numbness, burning, tingling or loss of sensation in your foot, this means the S1 or first sacral nerve root is being compressed. This is called sciatica. If you have neck pain and restricted movement of your neck or hear popping sounds when you turn or flex your neck and also have burning, numbness or weakness in your thumb and index finger, this is a clear sign of degeneration around the disc and sixth cervical nerve root.

Many years ago, when I became the first African American woman to train in neurological surgery in the UC system, it was common to take people to surgery urgently if they developed sciatica as a result of nerve root compression in the lumbar spine. Now we know that most of these surgeries fail and that the failed back surgery syndrome has become a leading cause of back pain! When you compare people who undergo surgery with those treated conservatively with exercise, physical therapy, medications and therapeutic injections of steroids into the injured nerve root, in five years the outcome is the same.

In the 1980s when I was in surgical training, the American Medical Association, the leading organization of doctors, was fighting to keep chiropractors from practicing their profession. According to a recent study published in Consumer Reports in 2008, most people in our country trust chiropractors more than medical doctors to care for their back and neck pain complaints.

Most patients complain that medical doctors just prescribe addicting narcotics like Vicodin, Tylenol with codeine and Norcos with muscle relaxants that intefere with their ability to drive, care for babies and work. These medications include the addicting sedative Valium and Flexeril and Soma, which produce very unpleasant mental effects.

A new medication called Neurontin or Gabapentin is being prescribed to treat the symptoms of nerve root compression, which can be debilitating and difficult to control. Medications in the NSAID class including aspirin, Motrin or ibuprofen and Naprosyn can be effective but cause stomach upset and ulceration. The over-the-counter preparations you buy at the corner drug store or supermarket in the liquid gel form can reduce stomach upset, especially when taken with foods.

Medical cannabis has also emerged with growing scientific evidence to have a positive effect on musculoskeletal and nerve pain from spinal injury and degeneration. Studies performed at the San Francisco General Hospital, UCSF and UC San Diego support the role of medical cannabis in treating symptoms of back pain safely in people who do not have to drive, operate heavy machinery or work in public safety positions, where the cognitive impairment seen with chronic cannabis use can impair short term memory, psychomotor function and motivation.

The best thing you can do to treat and prevent back and spine pain is to lose weight and come as close to a normal BMI or body composition as possible. A BMI under 25 and a body composition less than 34 percent for the modern 21st century upright woman ensures a long life and eternal endurance and a place in history like our African greatest grandmothers.