Former Congresswoman Cynthia McKinney writes that this statement, found after Dedon Kamathi’s death earlier this month, is a “letter that Dedon wrote in the case of his demise during the trip that he and I took together to Syria while it was under attack from U.S. imperial forces. This letter, I believe, is critical to understand who Dedon was and how committed he was to his community. He was ready to give his life for his beliefs and for us.”

Sept. 14, 2013 – Hotep. If this statement is being read publicly, that is because I was murdered by the U.S., Israel and their European- and Arab-backed rebel forces in Beirut or Syria.

Many have asked why would an educated African in America put my life on the line for Syria, for Arabs and not just live a middle class Negro lifestyle devoid of such danger. I have committed myself to the just struggles of Africa, Native Americans (AIM et al), Chicanos and Latin American revolutionaries.

The struggle of Africans in America via campaigns such as “Crack the CIA,” Free Geronimo and Smash the FBI-CIA-ADL, Trayvon Martin, Oscar Grant, racism at the beaches, pools, surfing – the list is long – has also been my commitment to the local U.S. arena.

The same has been asked about my travels and constant political work in the war zones of Libya, Cote d’Ivoire, Sudan, Eritrea and of course Mother Ethiopia in the 1973 period.

I answer that the principle of revolutionary internationalism and the objective of Pan Africanism as the driving ideological base of Nkrumahism-Turism is the reason.

Because the drive time programmers at KPFK and other Pacifica affiliates do not provide the other point of view of these anti-imperialist governments, I am committed via radio as well as lectures etc. to provide support to these progressive governments and movements.

Though not perfect, these governments and movements in relationship to the U.S.-backed forces, which attempt to disintegrate these nations into warring feudal fiefdoms, cannot be tolerated based on the principle of the right of a nation and people to self-determination.

I made a principled commitment to use whatever educational vehicles are available to challenge the U.S. Empire. My weapon is media, lectures, protest and organization.

Oppression by the U.S. and NATO and their stooges of anti-imperialist nation states is financed by our U.S. citizens’ tax dollars. The disaster capitalism of attacking nations whose centers of surplus profits is beyond the reach of the vampire 1 percent is why they are targeted. Hence I/we fight back.

It is significant that these same alleged axes of evil, these same non-Western controlled market economics have the most advanced position on the role of women, national minorities, religious minorities, economic nationalism, foreign policy independence.

Hence they must be defended. Whether it is the Black Student Unions, the Black Panther Party, the All African People’s Revolutionary Party or Freedom Now, I made a principled commitment to use whatever educational vehicles are available to challenge the U.S. Empire.

My weapon is media, lectures, protest and organization. 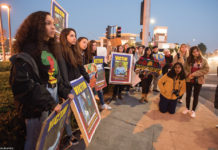