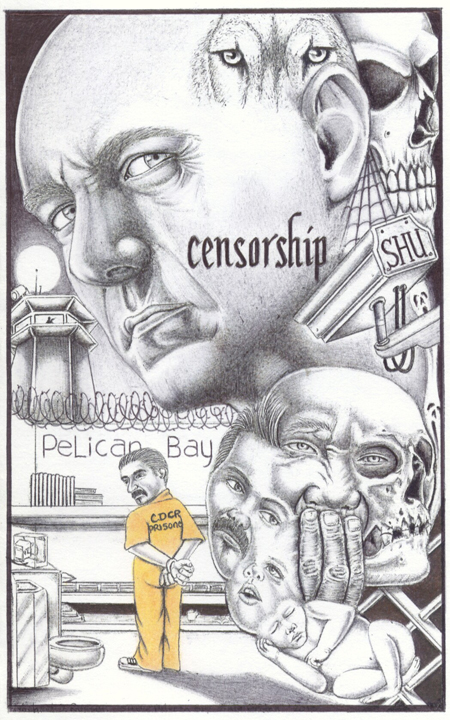 The San Francisco Bay View National Black Newspaper for March 2013, Vol. 38, Issue 3, was censored by staff at Pelican Bay due to an article titled “Prisoners’ peaceful protest to resume July 8 if demands are not met” on Page 3 in the “Behind Enemy Lines” section. The article was written by our four representatives, Sitawa Nantambu Jamaa, Arturo Castellanos, Todd Ashker and Antonio Guillen.

Before it was sent to Willie and Mary Ratcliff for publication, it was sent to the following: Gov. Brown, the secretary and undersecretary of the California Department of Corrections and Rehabilitation and to the warden of Pelican Bay State Prison. The article was then forwarded to many news outlets, including the local news here in the Crescent City area.

Every prisoner with a TV watched it being aired three or four times, where it was also reported that we prisoners will be going back on our peaceful hunger strike on July 8, 2013, if our Five Core Demands are not met, as per our representatives, due to our long term confinement, torture and overall prison oppression, in which prisoners are made to suffer indefinitely in solitary confinement, administrative segregation and security housing units throughout California.

The article for which Capt. Puget stopped delivery of the SF Bay View is the exact same article that Lt. Diggle passed around the prison for the four representatives, per Associate Warden P.T. Smith. That is how it was able to be circulated throughout solitary confinement.

So it is very questionable how CDCr and PBSP can now state that the article is, and I quote, “a threat to the penological interests” under California Code of Regulations Sections 3006(c)(5) and 3135(c)(5). The rules read as follows:

“3006. Contraband. … (c) Except as authorized by the institution head, inmates shall not possess or have under their control any matter which contains or concerns any of the following: … (5) Plans to disrupt the order, or breach of security, of any facility.”

There has been a clear line of communication between our representatives and CDCr and PBSP. It is understood that all prisoners’ actions will always be peaceful. Under no circumstances can we see how on the one hand the CDCr and PBSP can kill us prisoners with oppressive prison policies, then turn around and say that they are concerned with the security of the institution but not the many human beings inside this institution who are being tortured and murdered by proxy.

The prisoners are not the culprits here. We are only responding to the horrible prison conditions that are sucking the very life out of us each and every day we spend wasting away in solitary confinement, under sensory deprivation that allows the prison officials to administer a very cruel form of physical and psychological torture.

It serves the interests of human beings who struggle day to day, especially those in the New Afrikan, Afrikan Amerikan and Latino communities, who are disenfranchised by the poor governing practices of the states. It is a newspaper that is serving the interests of all poor citizens of this nation. It has no political ties to no one. It caters to no establishment. It is a very small newspaper that is exercising its right to freedom of speech, a freedom that is protected by the First Amendment of the Constitution.

Under no circumstances can we see how CDCr and PBSP can say that they are concerned with the security of the institution but not the many human beings inside this institution who are being tortured and murdered by proxy.

The CDCr and PBSP are trying to use their political power through the use of prison rules and policies to censor the SF Bay View. Why? No reason but racism, in order to suppress the voice of the prisoners and the people.

The PBSP SHU white male officers are obsessed with the SF Bay View. They go online and read its contents, and they converse with each other daily about it. They attempt to threaten, intimidate, as well as question prisoners who are writing these articles in the Bay View.

The lot of them, for the most part, see the Bay View as a threat to their interests personally. They sadly see only black and white. They have nothing good to say about the newspaper, despite it being representative of their own class interests. Yet they cannot see past their racism.

I asked one officer how many times have the L.A. Times, USA Today, Sacramento Bee or Triplicate been mail-stopped for printing the same rhetoric? He initially said he didn’t know, but once I pressed him, he said, admittedly, “Never.” I then asked him, “Why do you think that?” He immediately had an epiphany and went on the defensive.

The PBSP SHU white male officers are obsessed with the SF Bay View.

These officers are reading the SF Bay View front to back, and they hate the fact that someone would even provide a platform for prisoners to express themselves, especially when those prisoners are talking about prison oppression. Any mention of torture inside solitary confinement kicks off their reaction, because these officers are the oppressors, the puppets who carry out the many atrocities perpetrated against the prisoners daily in the prison industrial slave complex.

To say the SF Bay View is a threat to the penological interests of the prison and that it plans to disrupt the order or breach the security of any facility is what those of us in this country who are conscious men and women of all nationalities call “institutionalized racism,” where institutions hide behind broadly interpreted prison rules, policies, laws, both state and federal, to suppress the people’s right to assemble in peaceful protest by exercising our freedom of speech, especially where there exists an outright abuse of power by the state and federal government.

These officers are reading the SF Bay View front to back, and they hate the fact that someone would even provide a platform for prisoners to express themselves, especially when those prisoners are talking about prison oppression.

The only defense that can protect the people is to assemble the power of the people. We are our only defense. We have suffered enough injustice at the hands of a very evil system – CDCr and PBSP – and it is time that we prisoners express that pain and suffering by all means at our disposal, because CDCr and PBSP are censoring SF Bay View in order to censor prisoners, because we are exposing the cruel and unusual treatment of prisoners.

We collectively commend and value the courage and commitment as well as the principled stand that the SF Bay View is taking to speak truth to power. But there must be real clarity brought to what is going on here, because throughout Amerika there are New Afrikan prisoners who are held in solitary confinement for refusing to become a-political, meaning to cease adhering to their political, ideological and philosophical beliefs, for which we are persecuted by the state, which is a practice that is in direct contrast to our First Amendment rights.

These cruel and unusual punishments are crimes against our humanity, and because we choose to exercise our constitutional rights, we are now being severely punished and tortured by the state of California, the same state that is now censoring the SF Bay View to further silence our voice.

CDCr and PBSP are censoring SF Bay View in order to censor prisoners, because we are exposing the cruel and unusual treatment of prisoners.

We say that the SF Bay View must continue to fight against institutionalized racism, prisoner oppression, long-term solitary confinement and any other form of abusive actions by the state that uses its power to suppress the voice of the people, because the New Afrikans, Afrikan-Amerikans in Amerika, have no voice. We have been shut out of mainstream media politically, socio-culturally and economically since our inception into this nation, so that we have no outlet to convey our concerns and suffering, as they relate to our conditions inside of Amerika. We have been silenced as a people.

The current New Afrikan/Afrikan Amerikan newspapers, for the most part, only cover politicians who are Afrikan Amerikans and celebrities, along with stories that make the mainstream media or news where some injustice occurred that is so egregious that the world is forced to pay attention to it. Other than that, our voice as an oppressed class of people inside these prisons and in the free world is shut out.

So we ask every conscious human being to get a subscription to the San Francisco Bay View Black National Newspaper and all the unconscious human beings also need to get a copy of the SF Bay View. This way, Willie and Mary can continue to represent the oppressed people of this nation and the non-oppressed, while at the same time beating back the attacks by our oppressors.

We ask that the financially able individuals from all walks of life make generous contributions to the San Francisco Bay View in hopes that it can continue the struggle as the voice of the oppressed prison class and our communities by speaking truth to power where there is sincere need to do so and by all means support our Pelican Bay Human Rights Movement to end long term solitary confinement and prison torture, the death penalty and suicides inside these torture chambers.

We write this article on behalf of our First Amendment Campaign and we encourage people to join our “Hands Off the Bay View” campaign.

We encourage businesses to advertise in the Bay View.