August Wilson’s largest message is to remember. He insists we remember our song, that we do our duty to life by remembering we were born free with dignity and everything. He is a Sankofa playwright capable of making the past come to life in the present. His methodology a metaphor for remembering you must look back to move forward successfully; if you drop the ball, you’ve got to go back to get it to be successful in the end zone. 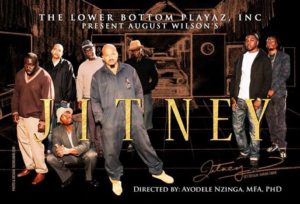 August Wilson’s American Century Cycle is a retrospective of the 20th century from the lens of North American Africans. It is a soaring song of the nation within the nation and its quest to re-member itself whole. It wrestles with honor, love and duty caught within the prism of race in America.

Wilson does not engage the major events of the century as much as he dwells on the ever present issues of the century from the vantage of ordinary people who live quietly extraordinary lives. Their triumphs and falls to go forward are the events from which we become informed of where we are now in the story of America.

Wilson insists we remember. Memphis Lee, in “Two Trains Running,” reminds us of the string of murders we have marched for throughout time. His problem with marching is that we march so we can forget. Memphis says, if a man is in your apple tree and you try to talk him down, he will laugh at you. You’ve got to have something in your hand – then he might feel different about how much he wants your apples.

Memphis feels marching lacks purpose. He observes, it seems to be the range of action we will engage in – and then we forget. Memphis reminds us of a youth named Beg-a-Boo killed by the police. People marched, and then he was buried. Memphis remarks, “All folks remember is the funeral.”

August Wilson’s American Century Cycle is a retrospective of the 20th century from the lens of North American Africans. It is a soaring song of the nation within the nation and its quest to re-member itself whole. It wrestles with honor, love and duty caught within the prism of race in America.

We should be reminded of the long list of young men killed by the police that inspired marching but did not stop the next murder. You could say that Wilson tells the same story decade after decade with the same characters in the same types of struggles – if you see that you can take the next step in understanding that, not much has changed in the North American African position within the public sphere, except the music and the clothes.

Some things have endured: our falling forward, the obstacles on the path, our insistence on being, chafing alongside the rampant incarceration and murder of young Black men as symbol and symptoms of the genocidal conditions in which we exist, striving for even ground, persist.

Wilson wants us to remember.

It is the systemic application of laws and actions designed to eradicate the opportunity of thriving of a particular group of people within the American public sphere. A march, a series of marches, perpetual marching, will not offer up justice without addressing the whole of the systemic array that thwarts thriving and compromises the quality of life for North American Africans in ways that show up in negative measures of mortality, overall wealth, educational achievement and social mobility.

We must call it by its name: genocide. We must address the monster where it lives and we must slay it. But first we must remember. Not just the rotten breath of the monster, not just its dead eyes, or its talons but all of it – once we can see all of the monster, perhaps then we can vanquish the monster.

We must call it by its name: genocide. We must address the monster where it lives and we must slay it. But first we must remember.

African proverb says if you want something you have never had, you must do something you have never done. In, “Jitney,” Wilson asks how we go forward if wisdom, experience and age pass torches to the future to carry and then righteously hobble the youth whom they have declared as saviors by prescribing their song. Becker, the owner of a jitney station, is broken in life. He is no longer interested in the answers to the questions he has posed to God – the answers no longer matter.

He is tired of waiting for God to hold his hand. He has endured hardship and humiliation and been used badly to provide for his only son to whom he has passed his torch. He has endured all manner of abuse to insure the son a smooth path in life. He says the son will walk through the world “like Daniel in the lion’s den.”

When the son strays from the path Becker has opened for him and decides to even the scale for the Beckers by murdering the white woman who has falsely accused him (the son) of rape, his father is mortified by his actions. The son insists his choice was the warrior’s choice – he did what his father could not or would not do in order to be right in the world.

The father says two wrongs don’t make a right. The son says right don’t wrong nobody. Once again Wilson sets the past and future before us in the form of father and son.

How do we hold on to the wisdom of the past but allow it to propel us to where we have not been? How do we give the future permission to do what we have not done? How can the future and the past stand in the same room shoulder to shoulder pushing the pendulum, moving the moral arc of the universe towards justice?

Becker ultimately understands that one cannot pass one’s duty in life to another. Even in the so-called passing of torches there remains the responsibility of shaping the future you envision. Becker comes back to pick up the ball, he decides to stand up for himself, those who have stood with him, and those like him by doing what he has not done: pushing back.

When he dies, helping out at the mill, the biggest and one of the most unfair sources of employment in town, his son picks up the ball to see it into the end zone, suggesting the necessity of continuity in struggle – a progressive building on what has come before, because of what has come before, to forge what must be.

Even in the so-called passing of torches there remains the responsibility of shaping the future you envision.

The rebellion in Ferguson is bigger than the death of Mike Brown or any single injustice. It is the cry of a people who remember Mike Brown, remember the more than 10 police involved murders since his, and remember the thousands of murders that precede him. It is a song from the continuum.

It is the sound of collective memory connecting dots and standing up to say enough – we demand the right to live. Standing tall enough to make them declare out loud from Rio to London that Black Lives Matter.

To address the fundamental right to life, a proper demand must acknowledge it is not an individual or a group of individuals that holds the key to equity. A briefly jailed or fired police officer will not redress the wrongs. Darren Wilson resigning will not redress the wrongs. Even if these individuals were given life in jail that would not be justice. It would not insure equity under law or guarantee respect for Black life.

What bars the way is a machine that favors a particular group of people giving them inherent privilege that benefits them automatically while actively harming what it has constructed as its antithesis. The structure in place does not require an active racist or even enacted racism to activate it – it’s built into the machine. The greatest trick the devil ever pulled was to prove he did not exist. The devil is in the machine. Break the machine – you free us all.

The song swelling in Ferguson with choruses around the world is about seeing the machine, calling the monster by its name. Ultimately it’s about dismantling the machine. This song demands to be heard. August, we are beginning to remember out loud being born free with dignity and a duty to our lives. We are singing in Ferguson, everywhere.

Ayodele Nzinga, MFA PhD, is the founding director of the Lower Bottom Playaz, using live performance as a form of community engagement. She is an actress, a spoken word artist known as WordSlanger, a lyricist, and a published poet and playwright. Email her at wordslanger@gmail.com.