On March 27, Mayor Ed Lee and Supervisor John Avalos released the long-awaited report on the results of the first year of San Francisco’s landmark Local Hiring Policy for Construction. The verdict is that the law is successfully boosting employment for city residents. 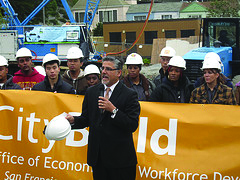 And it’s doing so in dramatic fashion.

The San Francisco Chronicle points out that prior to the December 2010 adoption of the local hiring legislation crafted by Supervisor Avalos and a coalition of community and labor advocates, the City included, on average, only 20 percent local residents on taxpayer-funded construction. Local hiring reform advocates pointed to a failed decades-old law that required that contractors make no more than a “good faith effort” to hire locally. The City’s new local hiring policy was quickly embraced last year by former civil rights attorney Mayor Lee, who made successful implementation of the law a priority of his administration.

One year after the law went into effect on March 25, 2011, local resident participation on the same construction projects has jumped to 34 percent, an increase of 70 percent above “good faith” levels. Moreover, the new local hiring policy has increased racial and gender diversity on public works projects.

The current class of CityBuild hopefuls, eager to join other community apprentices who have recently joined unions such as the Operating Engineers and Sprinkler Fitters to pursue their construction career as a local hire, were on hand to show the City the faces of local hire.

“In the first anniversary of our historic Local Hire law, we are proving that we can rebuild our City’s infrastructure and ensure our public investments are creating local jobs for San Franciscans,” said Mayor Lee. “As our economy recovers, we must continue implementing the next steps of our Local Hire law to ensure that City investments in rebuilding our roads, parks and sewers keep putting City residents back to work.” 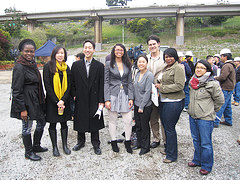 “We needed a New Deal in San Francisco to get more community members onto local construction jobs, something that failed us under ‘good faith efforts.’ It is a testament to the collaboration of community members, labor leaders, contractors and government that we came together to create and pass the local hiring law in December 2010,” said Supervisor Avalos, particularly thanking labor officials who were on hand from the Laborers, Carpenters, Operating Engineers and Cement Masons unions.

David De La Torre, secretary-treasurer of Laborers Union Local 261, one of the City’s key partners in CityBuild and local hiring, thanked Mayor Ed Lee for his leadership and commitment to providing job placement opportunities to San Francisco residents. “It’s not just a job, it is a career – and that’s how they should think of this. And that’s what [the CityBuild Academy] provides, the skillset. I come from the rank and file. I wish they’d had a class, an academy, like this when I was out there. It does give you a heads-up, a competitive advantage,” said De La Torre.

“It’s still early, but these are clear signs that we can use the City’s local hiring policy to get more local workers onto public projects and break cycles of poverty in our most disadvantaged communities while continuing to save taxpayer money on construction,” said Brightline executive director Joshua Arce. “Our local hiring law is a new model for how community groups and organized labor can work together to rebuild cities.”